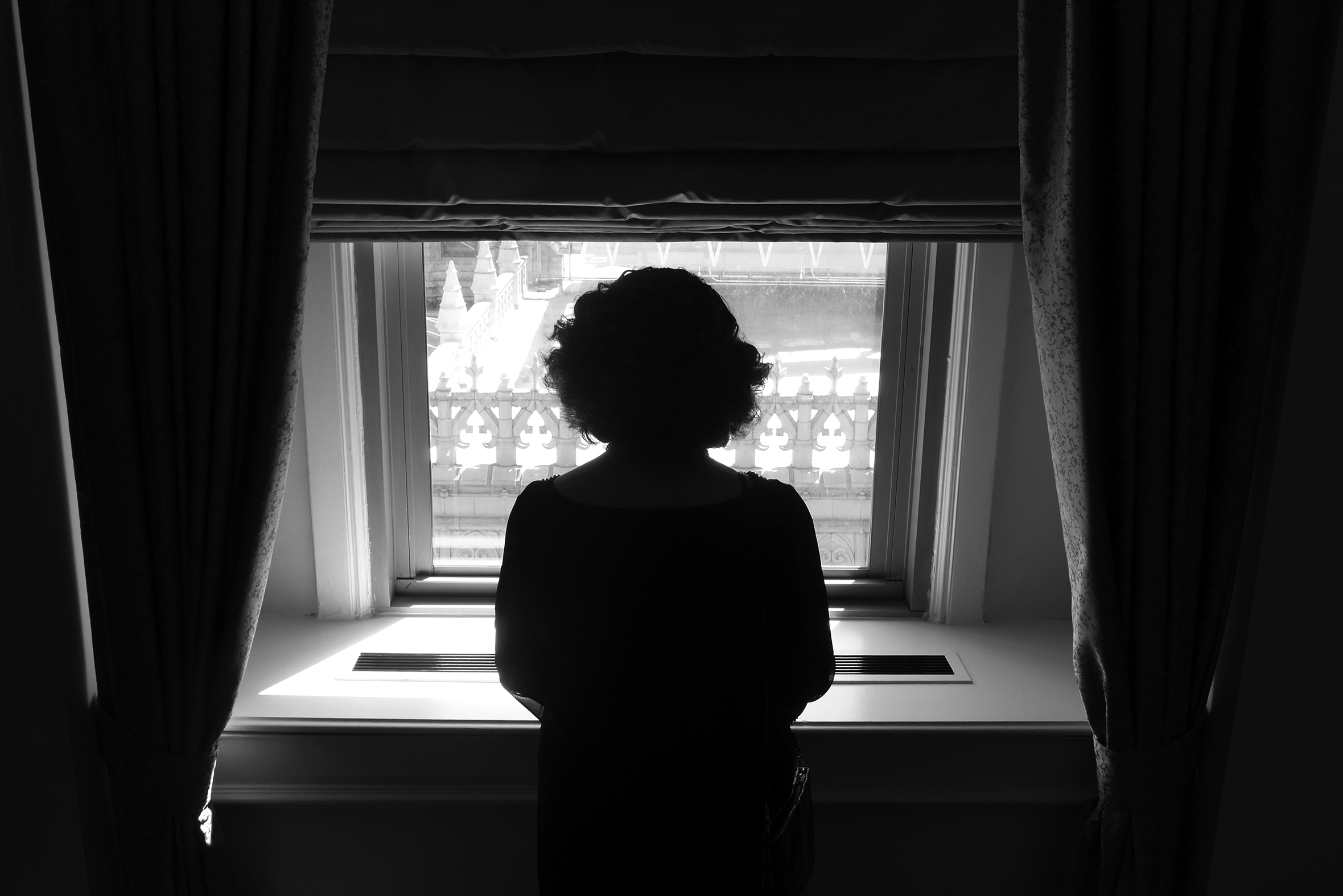 When I arrive for my monthly visit, I find her staring out the window at the neighbors’ house across the street. I think they moved, she says. She saw trucks and people carrying boxes. I know a young couple lives there, but their cars are not in the driveway. They moved? I say. Really? When, for the second time, she says she thinks the couple moved, I say, They only bought the house a year ago. The third time I say, Maybe they are just at work. The fourth time I say nothing. When I see their cars in the driveway at 5 PM, I say, There they are. They haven’t moved.

The next day she says again, I think that couple across the street moved.

This woman is my mother, but also not my mother.

My mother would never ask, as we stroll beneath an oak tree in autumn, What are those little things on the ground?

My mother would never say, as we walk on the beach, Why are those stones there? They should remove them.

This mother wants to know what this “thing” is for — a new scrub brush I bought for her. To clean pots and pans, I say. My mother would never ask such a silly question. She was a fanatical cleaner. Once, when I was growing up, she was so intent on cleaning the house that she vacuumed the ashes from the fireplace the morning after we’d had a fire. But the ashes were still hot, so when she emptied the vacuum into the trash, the bag caught on fire.

My mother kept an immaculate home, all eight beds — seven children’s and hers — made with military tautness each day before we returned home from school. This mother rinses the plastic dog-food containers after she’s fed her dog and stacks them in the kitchen cabinet, though the containers still have grease in the corners. I throw them out when I’m there. She never misses them. She refuses to wear the glasses she’s needed all her life, so she doesn’t see that every dish and fork she washes is still dirty.

If she has to leave the house, this mother refuses to drink anything, with the strange logic that she doesn’t want to have to pee, even though we are going to a doctor’s office where there is a bathroom. Later she becomes weak and dehydrated. My mother was a nurse for forty years, so she would know how dangerous dehydration can be, especially for the elderly.

My mother would not have had four cavities at the age of eighty-three, or needed several teeth pulled. She had a movie-star smile, the most gorgeous straight white teeth, which she cared for meticulously with her own set of dental tools: scrapers, a sickle probe, and an angled mirror to see her back molars. This mother secretly eats at night, then denies it, though I find wrappers and crumbs in her nightstand drawer, and half-eaten slices of cheese. She doesn’t brush her teeth before bed or use the fluoride mouthwash I placed on her bathroom vanity, labeled in magic-marker: RINSE EVERY NIGHT. The fluoride rinse disappeared, like so many other things that vanish from visit to visit. Where are all the washcloths I bought? The fingernail brushes? The ten (at least) pairs of reading glasses my sister placed around the house for convenience? Gone. Where is her new puffy winter coat? Where’s the Lifeline that notifies an emergency service if she falls? (The last one was in the trash, it turned out.)

Everything new disappears, within and without. Alzheimer’s disease is eroding her hippocampus. I’ve seen the brain scans, the black spot that should be gray. She has what the neurologist calls “rapid forgetting,” so she lives in a state of evanescence; nothing holds.

This mother forgets to take her daily pills. She gets her days mixed up, so the labeled pillbox doesn’t help. When she does remember, she empties the pills into her crimped, arthritic hand and tosses them into her mouth, not realizing some have dropped onto the floor. (I figured this out when I vacuumed and saw all sorts of pills under her bed.) When she misses her dose of Imodium, she has an accident. (Diarrhea is a side effect of her Alzheimer’s medication.) As I clean it up, I remind myself, It’s not her fault. She can’t help it. She cries and says she’s sorry, and my heart breaks for this old woman I do not recognize.

Why isn’t she in assisted living? you might ask. Why haven’t her selfish, neglectful children given her the help she needs? One trait that this mother and mine have in common is stubbornness. This mother won’t let the cleaning person come into the house. Hiring someone to clean is an insult, since she believes that she’s still the fastidious housekeeper she once was. When she refuses to open the door for the cleaner, the service calls me, and then I call her and say, Please let the cleaning woman do her job so she can get paid.

She tried assisted living once, to the relief of her children, but after twenty-four hours she began to call each and every one of us, begging to be picked up from “this hotel.” She called everyone whose number was in her phone: nieces, nephews, sons-in-law. Come and get me, she would say. I’ll pay for the gas. She begged and cried and grew angry. She threatened to throw herself in front of a truck. This is the perfect place to do it, she said. (The facility was located on a busy road.) The director of the assisted-living facility sent us photos of her enjoying sing-alongs, told us to hold out, that she’d adjust, but at night from her room she’d phone one or another of us every ten minutes, desperate. The staff overheard her threatening to kill herself and called 911. In the emergency room she smiled as if nothing had happened. Suicidal patients are usually kept for twenty-four hours, but the hospital sent her back to the facility within the hour because it was clear she was not suicidal. She just preferred lying on a gurney in the emergency room to being in assisted living.

After eleven days we gave up. We couldn’t take it anymore. We felt horrible for torturing her. That’s the word she used: Why are you torturing me?

When she got home, she walked around her house touching everything: all her tchotchkes, the side table with photos of her eleven grandchildren, the star-shaped glass dish on the coffee table (she has many star-shaped objects as her maiden name is Starr), the couch, the chair, the vase still holding wilted flowers. She has bouquets all over the house, and when she runs out of blossoms in her yard, she steals them from her neighbors while walking her dog. She touches this and this and this and that — all hers; all the things that tie her to this place, that anchor her to the world, even as she is floating further and further away.

As I’m packing up to leave, she walks into the guest room, this tiny, shrinking woman, just four foot ten, an inch lost to time and gravity. She holds up a coin. Is that a silver dollar? I ask. She nods, smiling. A real one: 100 percent silver. For helping me, she says. And I want to cry.

It’s the kind of thing my mother would do.

I Pledge Allegiance To The Republic

More Of This, Please